(Note: This story has been reprinted from “The View From Swamptown” in the North East Independent with permission of the author.)

If there's one thing that most folks take for granted these days, it's that when you turn on the faucet in your kitchen or bathroom, good, clear drinkable water is going to come out. But it wasn't always that way; back about 64 years ago, the good people of the villages of Wickford and Hamilton were learning this lesson the hard way.

You see 64 years ago, those folks had just gotten over the horror of the worst hurricane to ever hit these parts. The waters of the Narragansett Bay had subsided and left an awful mess. Trees were uprooted, homes were destroyed or moved off their foundations, boats were parked where no one ever imagined they could be, people were missing, families were separated, cars were swept away never to be seen again, and everything was covered in the most foul slimy mud that you could possibly imagine.

But that wasn't the worst of it, as these harried and overwhelmed folks were just realizing. Everywhere from Pleasant Street to Poplar Point to Salisbury Avenue, people were realizing that the truly unthinkable had happened. Everyone's well had turned brackish! Nowhere across that wide swath of homes was there anyone with drinkable water. The delicate balance between the fresh groundwater of the land and the salty sea of the Narragansett Bay had been forever changed by the giant hurricane. It was a public health crisis of major proportions. 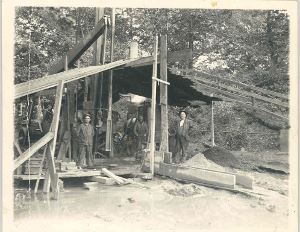 The elected and appointed officials of the town met in crisis mode. For the time being it was decided that the overworked men of the town's Fire Department would bear another burden. Each day they would make the rounds and fill up the pails and buckets, which were left out on the front steps and porches of all the citizens of the affected areas without water. That was for the short term; the long term solution required something that seemed an enormous task. Some way must be found to provide the town's people with good drinking water again.

With this daunting task in mind, a group of prominent citizens began to meet informally at the beginning of 1939. By spring of that year, they were officially sworn in as members of the State-sanctioned North Kingstown Water Commission.

Chairman Hiram Kendall, Secretary Irving Hazard, and committee members Wilfred Kingsley, Walter Cook, and Edgar Burchell wasted no time. They immediately weighed all options and decided that designing and constructing a distribution system that would run from the North Kingstown - East Greenwich border at the Hunt River, all the way down the Post Road, to a Standpipe at Juniper Hill, and then into the affected areas would be the most expeditious.

They negotiated a contract to purchase water from the neighboring town of East Greenwich at the rate of 7.5 cents per thousand gallons. Engineering firms and construction contractors were interviewed, plans were drawn up, contracts were signed, and work began post haste. All this was done in the evenings, night after night, as these men were volunteers and had full time jobs to go to as well. All the while the tireless volunteers of the North Kingstown Fire Department continued their daily ritual of water deliveries door-to-door, one home at a time. It was an exhibition of community spirit at its finest. 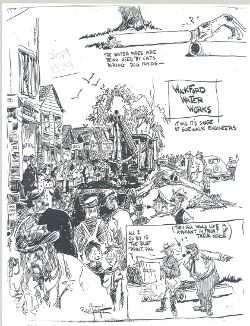 After a mere nine months, in January of 1940, in which time miles upon miles of 12 inch water main was layed, a 625,000 gallon riveted standpipe was constructed. Countless homes were tied into the system, the valves were opened at the North Kingstown - East Greenwich border, and clean water again began to flow into the homes of Wickford, Poplar Point, and Hamilton.

Eventually in 1942, the town would sink its own well and end its dependence on its neighbor to the north. But that was not an issue then, for after 16 long months of waiting patiently for the man from the Fire Department to deliver a few gallons of clean water, people's lives finally got back to normal. But you can bet that folks who lived through that water crisis never again took that clean, clear water pouring out of the tap for granted. Something to think about when you're about to grumble over odd / even lawn watering, eh?