The roots of North Kingstown extend back in time to 1637, when Roger Williams, recently banished from the nearby Massachusetts Bay Colony, established a temporary trading post at the intersection of two major Native American thoroughfares, the Pequot Path (now Post Road) and the major east-west route of Narragansett People between their winter and summer villages (now Stony Lane); this seasonal trading outpost was additionally adjacent to the home of his friend Narragansett Chief Sachem Canonicus.

Williams was followed by two additional seasonal traders, Richard Smith and Edward Wilcox in 1639. Wilcox left the area after a time and relocated to the region that was to become Westerly, but Smith in 1641 and Williams in 1643 decided to make the “Narragansett Country,” as it was then known, their permanent home. Roger Williams, for his part, stayed on here at Cocumscussoc for nearly eight years, farming, raising goats on Queen’s Island, and trading with the Narragansett People for fur and wampum.

Much of Williams’s groundbreaking writings, including Experiments of Spiritual Life and Health were written here. In 1651, Roger Williams, needing funds for a trip to England to secure the Rhode Island and Providence Plantations Colony’s Charter, sold his land to Smith and never again lived here on a permanent basis. Richard Smith on the other hand was here to stay and increased his land holdings greatly through his involvement in the 1658 Pettasquamscutt Purchase. Smith’s vast estate eventually included all the lands in an area approximately nine miles long by three miles wide. 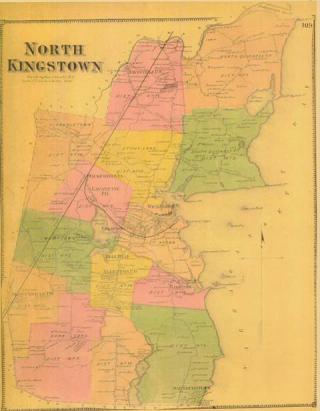 In 1674, Kings Towne was founded by the colonial government. This region contained much of the old “Narragansett Country” and included the present day towns of North Kingstown, South Kingstown, Exeter, and Narragansett. It got off to a rocky start though, as by virtue of its strategic location in the region and Richard Smith’s growing allegiance with the Connecticut Colony, it became the center of the whirling maelstrom that was the King Phillips War, a conflict between the Narragansett and Wampanoag People and the inhabitants of the Connecticut, Plymouth, and Massachusetts Bay Colonies, fought in 1675-6. More than 30 years of peaceful co-existence between the settlers of the region and the Narragansett people was over in the flash of muskets and the corresponding destruction of all colonial structures south of Warwick.

When the smoke settled, Kings Towne was now in the sole possession of the English and European settlers and colonial expansion began, primarily adjacent to Cocumscussoc, in the Quidnessett region, and at Bissells Cove (Hamilton) and Davis Mills (Davisville). By the start of the 18th century, settlement in all areas of Kings Towne was increasing at such a dramatic pace that the colonial government divided it up into North and South in 1722, with the understanding that North Kingstown, which included all the areas of earliest settlement, was to be the 1674 town. North Kingstown was later partitioned again in 1742, when Exeter was formed out of its western regions.

By and large, 18th century North Kingstown can be characterized as an agricultural community made up primarily of small to medium sized family farms, although two farms, that of Lodowick Updike (heir to Richard Smith) and Ezekiel Gardiner were expansive and successful enough to be considered a part of the greater “Narragansett Planter” society centered largely just across the border in South Kingstown. Additionally, the seaport of Wickford, established at the beginning of the century, rapidly grew in prominence until it rivaled its sister across the bay - Newport.

The 19th century saw water-rich North Kingstown, with its many rivers and streams, plunge headlong into the textile revolution that had begun earlier in the northern part of the state. Numerous mill villages were established at every feasible location along the Hunt, Shewatuck/Annaquatucket, and Pettasquamscutt River systems. Larger villages like Lafayette, Hamilton, Belleville, and Davisville as well as smaller forgotten hamlets such as Oak Hill, Annaquatucket, Narragansett Mills, Shady Lea, Silver Springs, and Sand Hill Village owe their existence to the dominance of the textile trade throughout this timeframe.

The textile industry largely flourished throughout this century and into the first quarter of the 20th, but soon after, as happened all across southern New England, this way of life began to ebb. By the close of the 1930’s the age of the mill village was largely a thing of the past.

The 20th century saw North Kingstown’s destiny head off in a new direction, driven by two very different factors. The first was the rapid establishment in 1938, of the Quonset/Davisville military complex, designed and constructed at breakneck speed as the nation contemplated its future role in World War II. The corresponding massive influx of personnel, first to construct and then to staff, the big base, forever changed the fabric of the community as it too expanded and contorted to accept this rapid increase in citizenry.

The second factor impacting the community’s development was the ever-increasing concept of North Kingstown as a summer resort community. The age of the automobile and the increased mobility that this afforded people allowed numerous summer cottage colonies such as Saunderstown, Mount View, Shore Acres, Plum Beach, and Barber Heights to spring up where farms once stood. By the middle of the 20th century, North Kingstown, which had just prior to that time frame been an agricultural and mill village centered community, was now largely residential in nature and would stay that way throughout the 20th century and into the 21st.